The history of the school is a land mark in Thornley, Lord Derby gifted the land to build a school for the children of Thornley including his tenants and workers children. 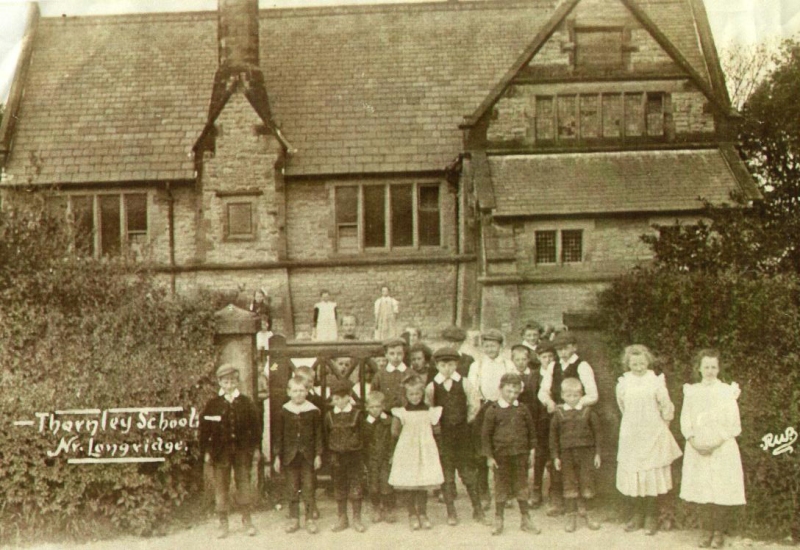 Thornley School opened in 1880 having been built by local workmen using local stone and records show the gritstone cornerstones were from the Tootle Heights quarry on Longridge fell. The roof slates came from further afield.

There is an old Limestone quarry to rear of Thornley School . Documents and photographs available from the Chipping History Society show the successful story of the working Stone Lime Quarry and Limestone Kiln. The Lime stone Kiln and pits at Arbour farm are now a fossil rich site recognised as a “Site of special scientific Interest” (SSSI).

On closing in 1978 the old Thornley school building alongside the Memorial Hall (built within the grounds) were used for a period of time by the community. The most remembered social activities includes the Thornley women’s institute, the whist and Dominoes nights and family / children’s parties.

In 2012 concern was expressed regarding the deterioration of the school building. This situation was made worse by criminal acts of theft of the lead from the roof and the stripping of internal electric wiring causing extensive damage to the building.

In January 2013 on the Business proposal being withdrawn the Thornley Community Space became the only successful proposal.

The idea to use the old school building for Community Space was born from a group of Thornley parishioners who met regularly throughout the process and continued their strong appeal to use Thornley School for community use. This group is growing in strength and so is the spirit and soul of Thornley.

Thornley School is to become a meeting place “community hub” for the people of Thornley and surrounding parishes.

Do you have more information?

We would love to hear from you and make this page a definitive resource for the Thornley School building. If you have any experiences you would like to share or a more detailed history please let us know via the contact page and we will update for everyone to see!

We have some exciting events coming up, see the events page for more information